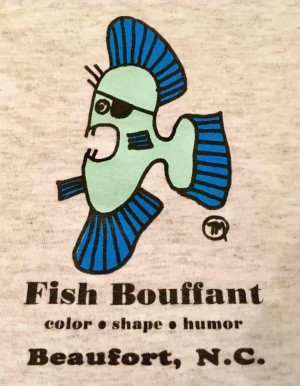 Craig Gurganus, the surfboard sculptor and founder of Fish Bouffant, died in Beaufort on July eighth. He was sixty six, at home, surrounded by family and friends. He passed while listening to favorite LPs from his teen years. Gurganus---known for his home-brewed combination of Artist and Activist---achieved a unique measure of public acclaim. Who else’s sculpture can be found in the collections of both ex-President George H. W. Bush and renegade film-actor Nicholas Cage?

Craig was born September 10th, 1952 to Ethel and M.F. Gurganus in Rocky Mount, N.C. His surviving brothers are Allan, Bruce and Gary Gurganus.  Craig’s athletic ability was evident early; fresh home from the hospital maternity ward he resisted his bassinet by turning over in it twice. He seemed born to swim and his family recalled him at age three fishing from a farm pond for eight hours in the pouring rain. Born inland, his first sight of the ocean at Wrightsville Beach made him scream with recognition. Salt water became    the medium of his life. Surfing became a guiding obsession, the Weather Channel his Bible.

With a group of lifelong friends from Rocky Mount, he would chase waves to California and along the home state’s coast. Craig studied at Guilford College before moving to a seaside life. His mother was an artistically inclined retired school teacher. He had always drawn and painted but, in California, the twin passions of surfing and art coalesced. Craig had just broken his favorite (and only) surfboard when he noticed the fin shape of its jagged edge. He used his fiberglass skill to transform that day’s disaster into a life-like fish. Fish Bouffant was born.  For the next decades he somehow survived selling his highly cheerful yet anatomically-correct sea creatures.  Blessed with a bold design-sense and a joy in Key Lime colors, Craig’s cartooned menagerie appealed to both picky art historians and very young children. People who bought one of Gurganus’s creations seemed, like pet owners, to soon need another.  Craig thwarted art dealers with low prices reflecting his Democratic politics.  His work was seen not just in galleries but in hospitals and leading restaurants. Its pleasing surface, unembarrassed color and comic edge was always welcome.

Beaufort was the coastal village that felt most like home to Craig. He became a fixture on his bicycle, never too busy for conversation about where the blues were biting and the surfing good. A conscientious patron of Beaufort’s many bars, he preferred the dock bench at Finz Grill owned by his loyal friend, Paul Geer.  Gurganus was known for his good looks and ready kindness.  He was visibly a surfer---thick long blond hair, weirdly blue eyes, and natural grace. Somehow Craig never threatened other able amorous young men; somehow he knew to listen hard to women, especially the spirited and beautiful ones. He met such a Beaufort native, Becky Stokes, and sparks flew leading to a union and their remarkable son, Simon. Craig continued to produce more specimens of Fish Bouffant, often selling work from his home.  His Pine Street residence is painted pink and features a front garden of conch shells, black bowling balls and pastel zinnias.  Craig’s environmental concern was reflected in the very recycling of his fiberglass board art.  He campaigned against industries willing to turn our oceans into septic tanks. He contributed artwork to auctions and freely designed trophies for decades of surfing competitions. His generosity was quiet but acknowledged. Beaufort seems to produce equal shares of saints and pirates and Gurganus found his very own place in that continuum.

He had spent years working with fiberglass and toxic resin and perhaps that brought the cancer that made its first moves against him last year.  He was well tended by his community of friends, his loving son Simon and especially by Becky.  An experimental treatment at UNC failed to ease his symptoms and he came home to his colorful home and gallery.

There he was visited by weather-beaten surfing veterans, by kin, ex-loves and a younger generation of cultish admirers.  His brother, Gary, had been storing Craig’s LP records since the Seventies. Gary returned these old albums with a new phonograph. Bob Dylan, Patti Smith, Jackson Brown and others played softly but continuously till last week.  Then, after a day of visitors and well-wishers, during the only three minutes he found himself alone---with the feel of a good wave approaching from behind---Craig Gurganus, the local genius of Fish Bouffant, passed from one life form to another. And all while listening to the Grateful Dead.

A paddle out at the Oceanana Pier on Atlantic Beach will take place at 4:00 PM on Sunday, July 21, 2019. All are invited to participate in the paddle out or gather together in support on the pier.

In lieu of flowers, A GoFundMe Drive has been organized by David Cartier for Simon Gurganus’s college education https://www.gofundme.com/f/8ac43e