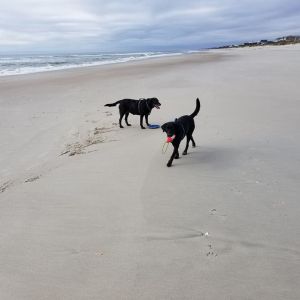 Nancy Francis-Heckman, 71, of Beaufort, passed away on Monday, January 6, 2020 at Vidant Medical Center in Greenville.

Affectionally known around Beaufort as “The First Ladies of Beaufort”, Nancy and her wife Barbara own and operate Beaufort Pet Provisions. Though Nancy and Barbara consider themselves married since August 23, 1990; it wasn’t until October 13, 2014 that they were legally able to marry in NC and became the first couple to do so in Carteret County.

Since 2011, Nancy lived in Beaufort; a town that quickly became very near and dear to her heart.  She served on several boards and clubs, slowly making her presence known and felt within its community. She and Barbara began the Beaufort Women’s Sailing Club in April 2012 as an activity of the Friends of the NC Maritime Museum. She served as board member on Beaufort Sister Cities, Junior Sailing Program and the Beaufort Lion’s Club.  In 2015, Nancy was appointed on the Historic Preservation Commission.

Nancy was a meeter and greeter wherever she went in town. Whether tourist, resident or friend, Nancy’s welcoming smile sparked conversations. Anyone walking a dog or sitting on a bench was “fair game.” Nancy loved to fish and boat, get involved with local activities such as being Parade Marshall for the Mardi Gras but her favorite activity was cooking. She annually participated in either or both the Crab Cake and Clam Chowder Cookoffs, gathered friends for special meals (Nancy’s Eleven), or took plates to neighbors and friends recovering from illness or surgery. Nancy volunteered regularly to help with fundraising activities around town to include the NC Maritime Museum, Wooden Boat Building, Beaufort Wine and Food; but, most especially anything related to Pet Relief. As co-owner of Beaufort Pet Provisions, Nancy’s vision propelled the store to embark on numerous campaigns which led them to start the True Heart Animal Foundation.

Nancy retired May 2014 from the NC Department of Environment and Natural Resources, Division of Marine Fisheries where she was the Enterprise IT Manager.  Prior to this, Nancy’s career in Information Technologies included working for a number of Fortune 100 Companies, to include Philip Morris USA (1982-1996), Overnight Transportation Company (1996), Capital One Services (1997) TEK Systems at GlaxoWellcome RTP (1998-2000), Bayer Corp (2000-2004), and EDS (2004-2008),  Professionally, Nancy held certificates in Project Management Professional (PMP), ITIL IT Service Management and Certified Quality Manager (CQM).

Family and friends will hold a celebration of Nancy’s life at 4:00 PM on Saturday, January 11, 2020 at Harborside Park and Harvey W. Smith Watercraft Center in downtown Beaufort officiated by Rev. Dr. Carolyn Roy. This is a casual attire event as Nancy wants us to share stories and celebrate while we listen, dance and eat to Carolina Beach Music.

Nancy is survived by her wife, Dr. Barbara Francis-Heckman of the home; son, Michael Penley and his wife Kestlyn of SC; grandchildren, James, Rory, and Aria Penley all of SC; sister, Elizabeth McLaurin of PA; brother, Joseph Francis of NC; mother-in-law, Alberta Heckman of FL; brother-in-law, Robert Heckman of FL; and a host of nieces; nephews; aunts; uncles; cousins; friends; and her two black labs, Luci and Belle.

She was preceded in death by her parents, Joseph and Bessie Francis.

In lieu of flowers, memorial gifts in Nancy’s memory can be given to the True Heart Animal Foundation, 129 Turner Street, Beaufort NC 28516. https://www.gofundme.com/f/memorial-fund-true-heart-animal-foundation