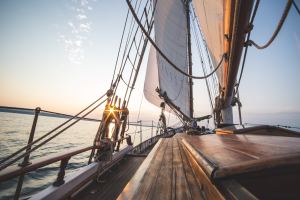 Romas "Sonny" Templeton White Jr., 90, of Beaufort, passed away on Sunday, September 12, 2021 at his home surrounded by family, his minister, and hospice.

A memorial service will be held at 4:00 pm on Friday, September 17, 2021 at First Presbyterian Church in Morehead City. The family requests attendees wear masks. The family will receive friends following the service.

Romas was born on November 2, 1930 to Romas T. White, Sr. and Ella Louise Brown White in Charlotte, NC.  He was quickly nicknamed “Sonny” to avoid confusion. After his mother’s death when he was 4 years old, his father was helped by her sister, Eunice, and brother-in-law, Bill, who had moved into the house to help care for young Sonny. Louise and Eunice were two of eleven children, which resulted in a large family of many cousins, aunts, and uncles to help raise Sonny.

Sonny loved his time on their various farms, working in his father’s restaurant, and learning about boats and fishing from Eunice’s employer who had also taken him under his wing. He was also a smart boy who did well in school, but certainly found his way into light mischief. In 8th grade, Sonny attended Hargrave Military Academy in Danville, VA where he remained through his senior year of high school. It was a summer break before senior year where he met his future bride, Jerry Elaine McKinney. A co-ed group of teenagers were playing football at the city park and with his eye on the prize, he tackled her to get her attention. And apparently it worked. Her mother wouldn’t let her car date, yet they still endured a long-distance relationship after he returned to school.  They had found their soulmates and married in 1951. Post-Hargrave and prior to marriage, Sonny had continued his education at the University of North Carolina at Chapel Hill graduating with a bachelor’s degree in education in 1952. He had several roommates with whom he remained close friends throughout the years. During college, he wanted to play football as he had at Hargrave, but his slight build was more conducive to track and field where he learned to excel at pole vaulting.

Now married with their first born, Cindi, he needed to support his young family and found work as a door-to-door salesman of Kirby vacuums. Funny sidenote, we still have a 1950s Kirby vacuum in the family, and while it still works, it weighs a ton!  One of his potential customers turned out to be a general manager at Ayerst Laboratories. Sonny did such a great job with his sales techniques that he was offered a job as pharmaceutical sales rep for Ayerst.  He didn’t sell a vacuum that day, but he did begin a 38-year career with the company that afforded life for their growing family. Through the years, his work continued as a hospital and government representative for the company, which also had moved the young family to Raleigh.

The family grew with the addition of Gary, Tim, and Lou Anne over an eight-year span.  One way Sonny was able enjoy life was to include the family in the activities he enjoyed the most – boating and camping. They would camp for 2 weeks at a time at Cape Lookout in NC with zero amenities on the island except for what they brought - their tent, sleeping bags, camping equipment, and coolers of food and beverages … even water! Days were spent fishing for dinner or diving for shells – a great life for four growing kids. There was always a boat, and while it started with a small sailboat and then motorboats, Sonny became enthralled with the sailing life in the mid-70s. The family took sailing lessons and with the first purchase of a 25’ Helms sailboat, the love for sailing was part of the family tapestry. By 1987, Sonny retired from Ayerst and later he and Jerry moved permanently to Beaufort, NC.  The boats got bigger along the way and long trips to the Bahamas or along the Intercoastal Waterway to the north and south were an integral part of life.  Even at 78 years old, Sonny and Jerry and a captain sailed to the Bahamas and lived on the boat for several months. Being on the water was his life.

Through the years Sonny was many things aside from a boat captain and father. He was a multiple trophy winning bowler at Western Lanes, a regular at the Player’s Retreat and Brother’s Pizza in Raleigh, the owner/publisher of a coastal magazine, a tinkerer, an avid reader of fiction and non-fiction, and a fan of old black and white movies – even silent movies!  He was also an avid Rotary member, and president of the Beaufort Ole Town Rotary, even attending Rotary meetings in other countries when he was traveling.  And he loved traveling. Through work or pleasure, Sonny and Jerry have traveled the globe from Australia to Europe to China to Mexico via plane, to all over the Bahamas via boat.  His life story would not be complete without mentioning his competitive nature and love of all things sports. He loved playing sports, watching his kids play sports, watching sports on tv, and ultimately, he himself became a state record holder in swimming and long jump with Senior Games.

Sonny was also a man of faith. He was a deacon and relished his time as a Sunday school teacher for junior high and high school kids. He and Jerry chaperoned several mission trips to Mexico with them. He loved to learn and took on adult Sunday school as a challenge to learn about many faiths. His church family became an integral part of their lives and was very important to them socially as well.

His four children went on to marry. Cindi Kilfoyle (Ned), Gary White (Willa), Tim White (Josie), Lou Anne White-Grose (Jim) then had children of their own, and now children of those children. His kids, along with their spouses, created a new generation of 9 grandchildren and 6 great-grandchildren.

Sonny was a friend to SOOO many people from just everywhere …. and we'll end it all with ... again, he was a sailor. See you at the marina, Dad.